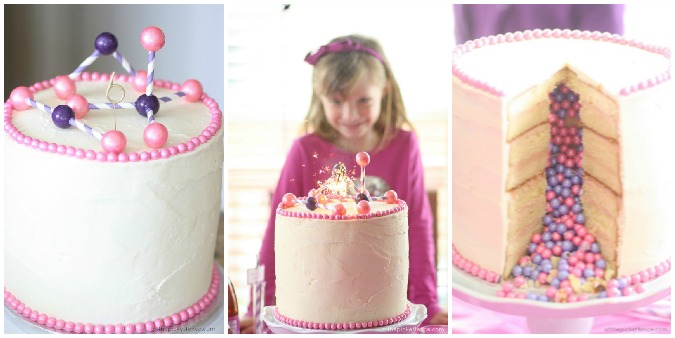 Thank you so much for all of your kind words yesterday about my daughter’s Super Science Party! I promised I’d be back today to show you just how I managed to make her 8 Layer Surprise Cake and I never go back on a promise.

When dreaming up a birthday cake for my daughter’s science party, I stumbled upon a photo of a wedding cake that looked like it was spilling tiny pink nonpareil jewels from the center and showed it to her.  Before I could even think of the logistics of such a cake (or the fact that I’ve never made anything bigger than a 2-layer cake), she declared it “the one”. 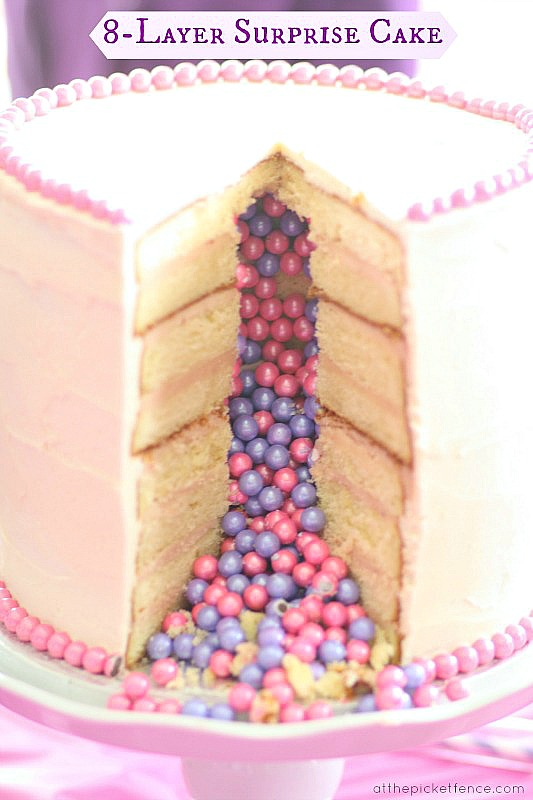 We replaced the pink nonpareils with sixlets and called it a molecular core to fit our science theme, but the interpretations are endless—I could easily see this cake holding gold coins for a pirate party, candy necklaces and jewels for a princess party, or a mysterious map or clues for a detective/spy party.

2 weeks before the party I baked four 9-inch round cakes. After leveling the cakes, I torted them (basically cut them in half) to create the 8 layers of the cake.  To make the hollow core I used a 2 ½-inch biscuit cutter to cut a hole in the center of 7 of the layers, saving the cake plug from the top layer and leaving the bottom layer intact.  Then I double wrapped and froze each layer. 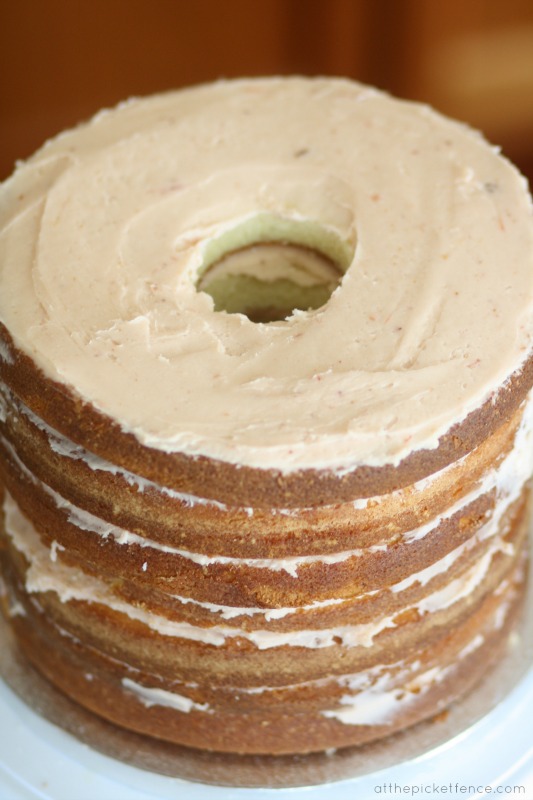 The day before the party I made multiple batches of frosting.  No celebration is complete without our family’s favorite vanilla buttercream recipe which I used to frost the outside of the cake.  The recipe comes from Lauren Chattman’s cookbook, Mom’s Big Book of Baking, but it has been a part of so many of our life events & celebrations that it feels like a closely guarded family secret.  If you’ve been looking for the perfect buttercream, this is the recipe for you. 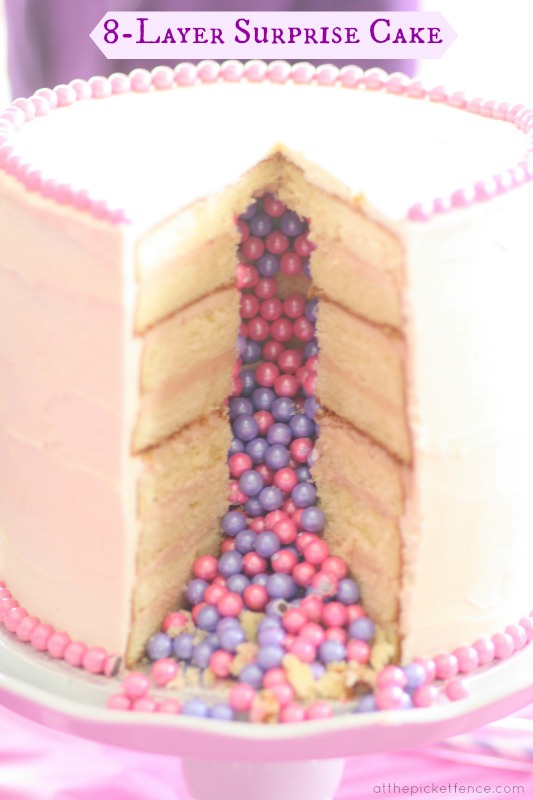 3.1
https://www.atthepicketfence.com/how-to-make-a-surprise-cake/
This recipe is copyrighted by At The Picket Fence 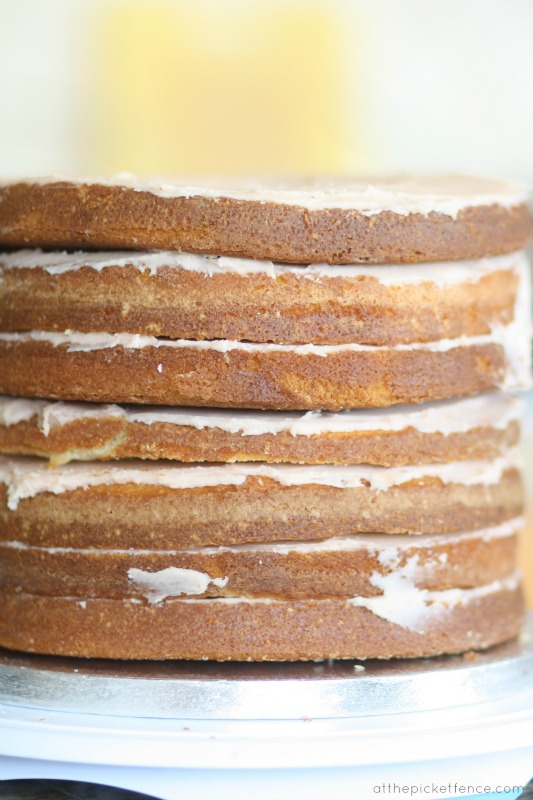 I took the layers directly from the freezer and in its frozen state, I built the cake up with thin layers of strawberry buttercream in between.  Before adding the final layer I poured the sixlets into the core, added the top layer, and put the cake plug in place. 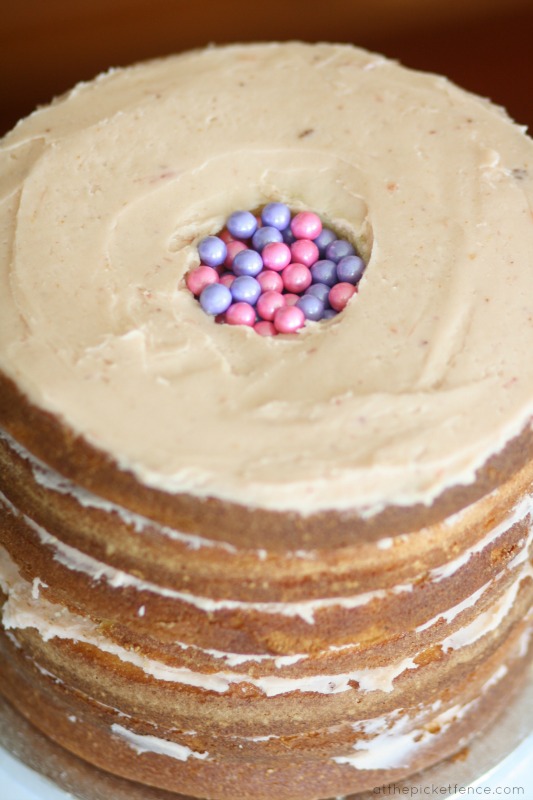 For extra support, I inserted 4 boba tea style straws, trimming the tops with scissors so they were level with the cake.  The straws slid easily through the layers and kept the cake from sliding and shifting as it was being cut during the party. 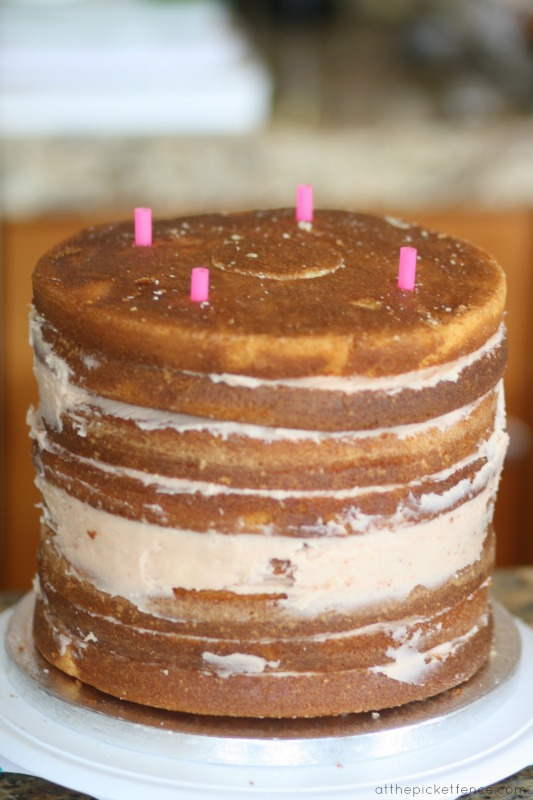 A thin crumb coat of frosting filled in all the gaps of my less-than-perfect layers followed by a thicker final layer of buttercream.   I loosely wrapped the cake and refrigerated it until the next day. 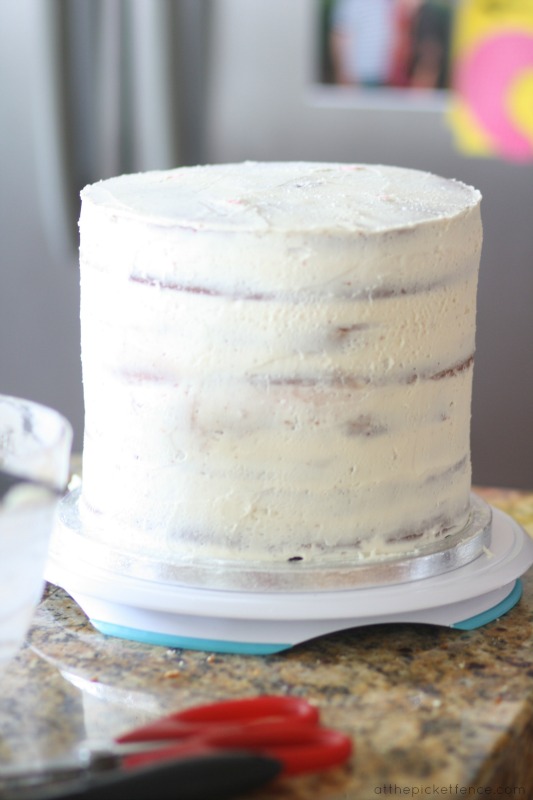 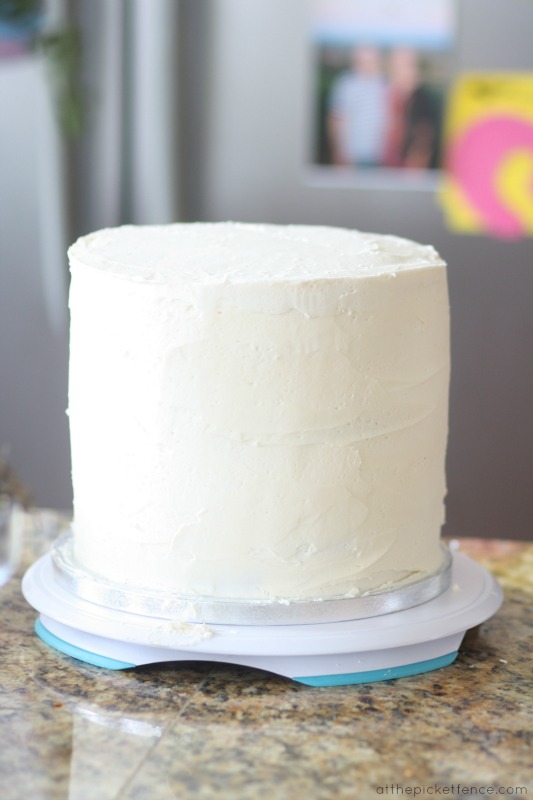 I wasn’t sure how quickly the contents would spill out of the cake and it wasn’t until about the 4th slice that the sixlets were able to break loose from the center. 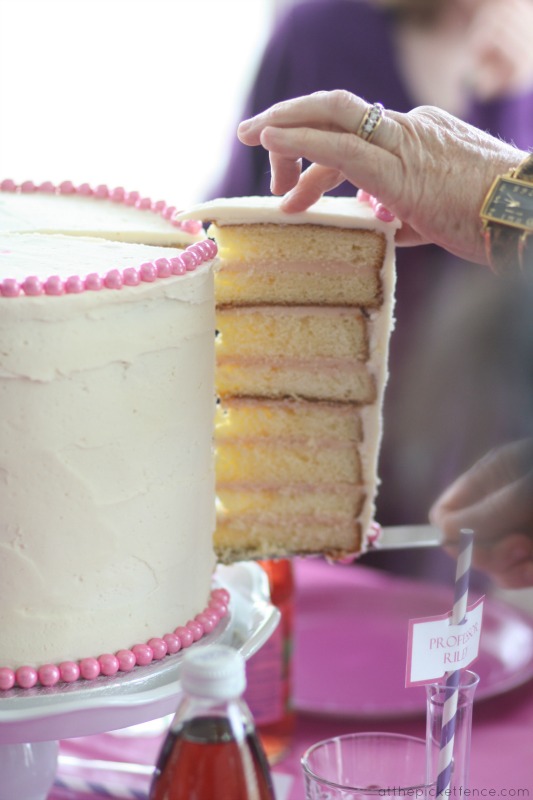 With the cake completed, I set to work on the oversized molecule cake toppers which were a bit of a last minute inspiration.  I cut striped paper straws in thirds and hot glued the ends to large gum balls, copying some of the diagrams from the gumdrop molecule building station.

Once the opening was large enough and the treasures emerged, the girls (and adults) couldn’t take their eyes off of it.  I was just so surprised that it actually worked!  Which honestly proves that it does not require much skill to pull off this showstopper. 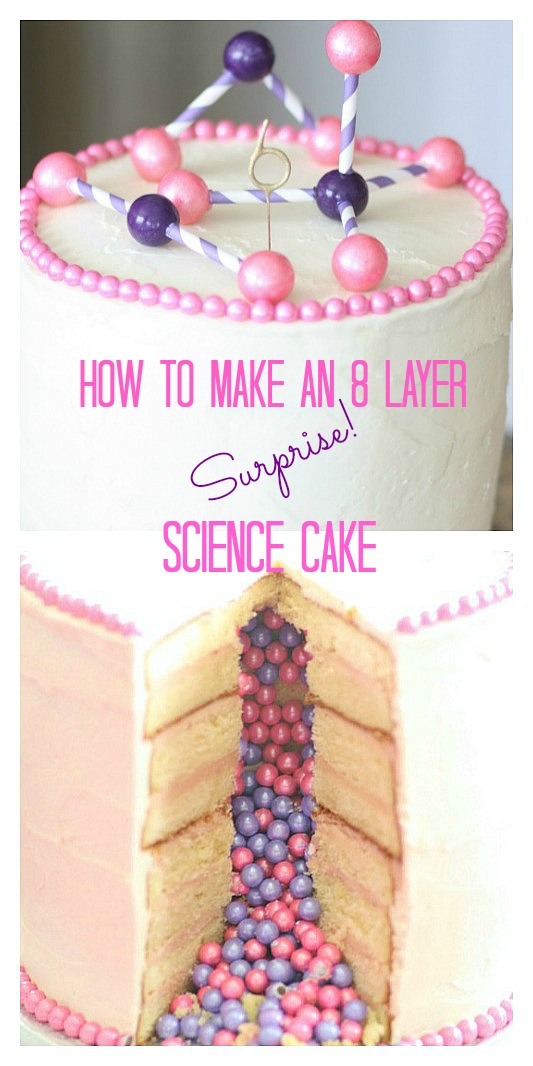 Thanks so much for joining me today At the Picket Fence, 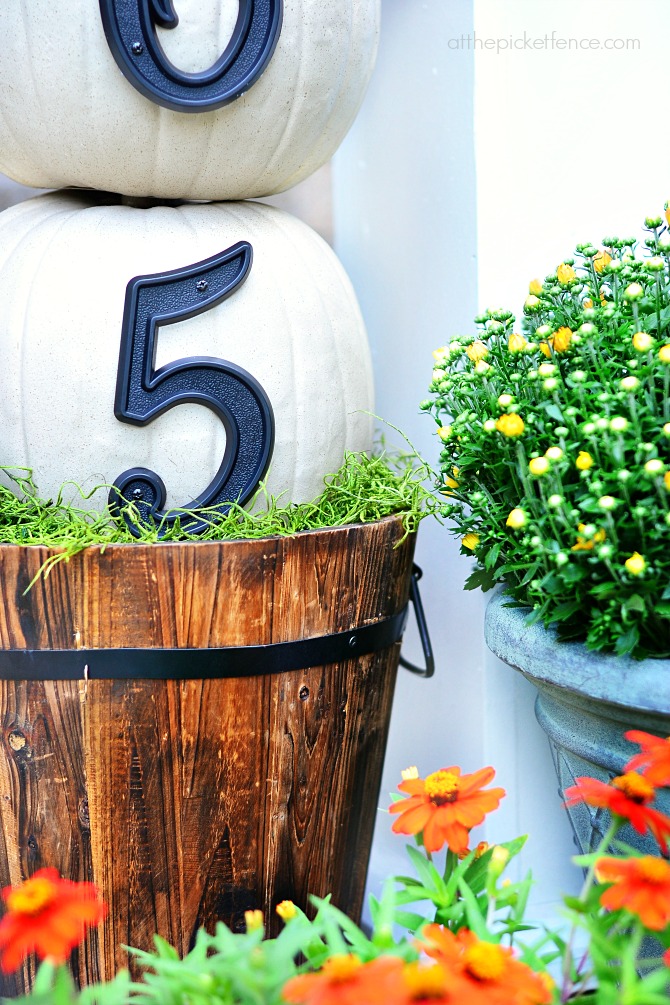 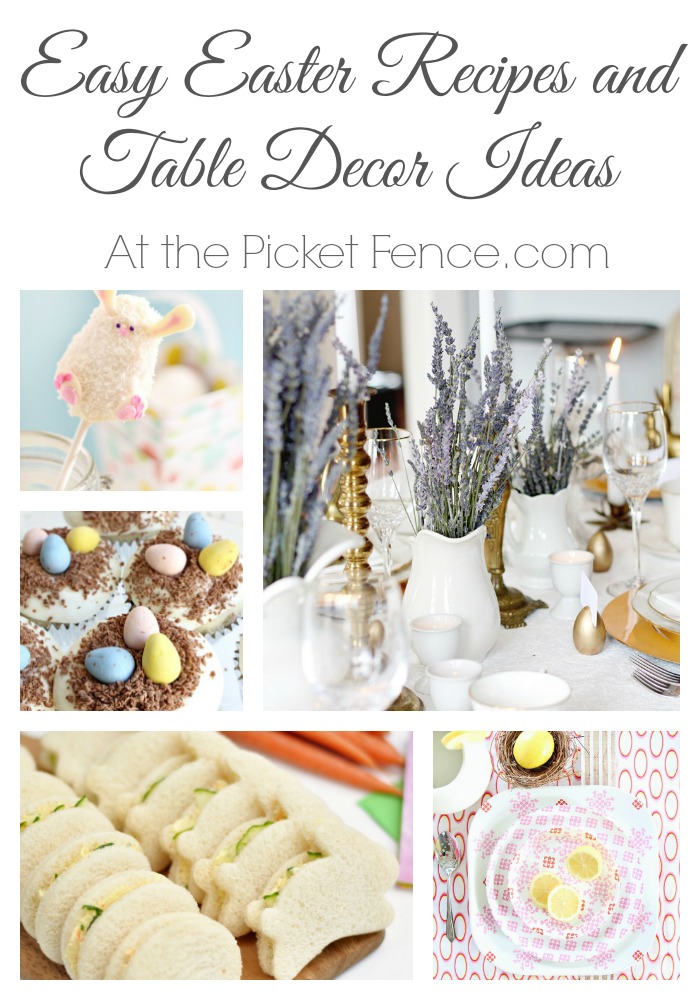 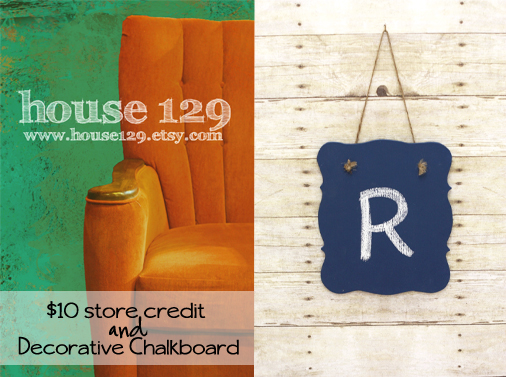