In anticipation of a new series we are going to be starting entitled,

What Took Me So Long?

I’m going to share with you a recent makeover that I did in our Master Bathroom that definitely falls under that category.

The series will be dedicated to all of those projects that we put off forever and ever and then when we finally get around to it, the simplicity of it and the speed at which it’s accomplished leaves us wondering why we didn’t do it a lot sooner!
I honestly never in a million years thought that I would be showing people this space.
Here is what it looked like Before 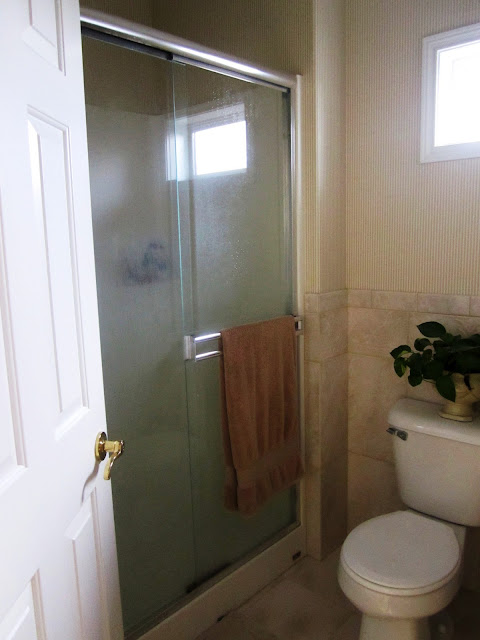 There is something about putting a picture of your toilet on the Internet that just feels so wrong.
And no, that is not frosted glass on the shower doors.
And yes, there is a reason that the light isn’t turned on.
One time my in-laws watched our kids for a couple of nights and they ended up staying in our house and I remember telling my hubby that there is nothing quite so humbling like the feeling of knowing that your Mother-in-law is going to be using your very grimy shower. I scoured and scoured it, but I think there are just some things that are beyond help!
So, let’s do the next best thing!
Cover it up!
I took 2 inexpensive drapery panels ($9.99 each) with built in Grommets and strung them up on an oiled bronze colored shower rod. 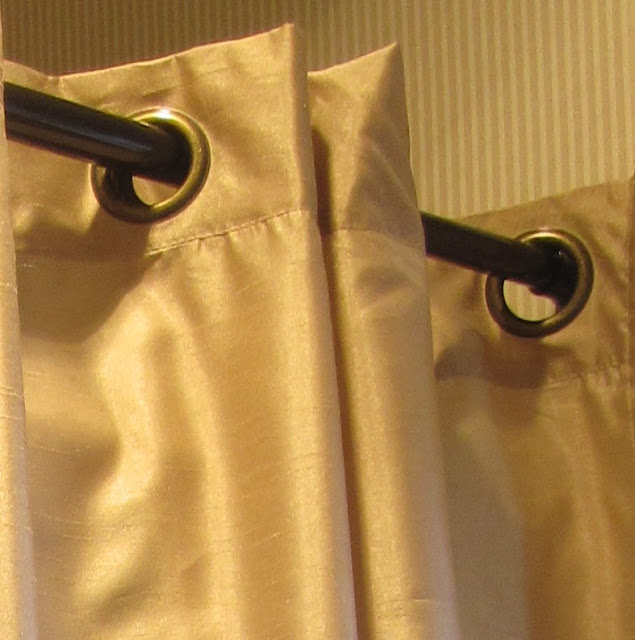 The length of the panels allowed me to add height to the space and using drapes instead of a normal shower curtain gave it the fullness I was looking for. The soft gold color picks up the 2 tones in the striped wallpaper. 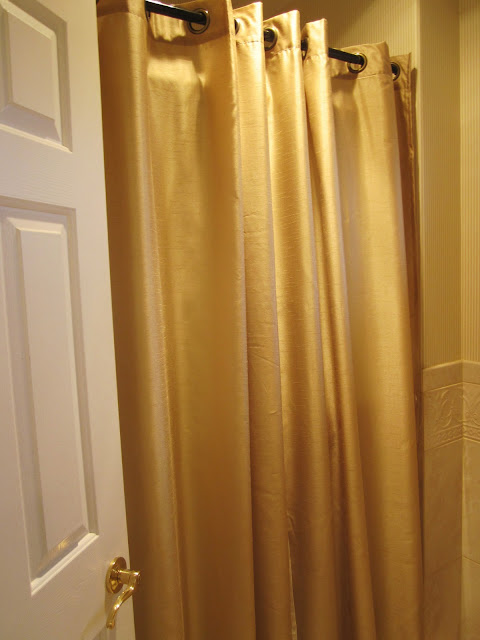 And on those rare occasions when I actually leave the door open, you can see the curtains in the same eye as my window treatments and the colors work together perfectly! 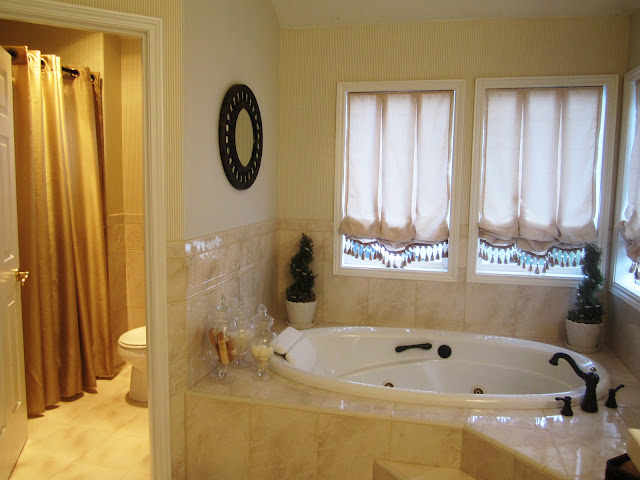 The second half of this “What took me so long?” project involved the towel bar and toilet paper holder in the same space.
We have wanted to replace them with oiled bronze to match the rest of the bathroom hardware but because one was attached to wallpaper and the other to tile, it was very difficult to find sets that matched up with the existing holes. 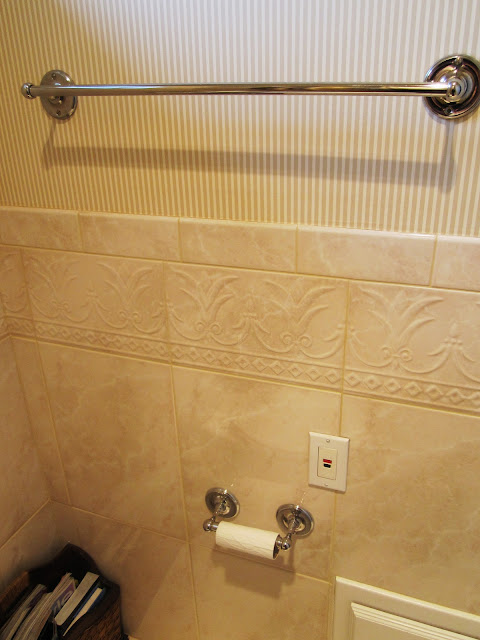 So, once again, I did the next best thing and just sprayed those suckers! Using a can of oiled bronze spray paint leftover from another project, I dramatically changed the look of this little space. Painting the round bars took a little more time and patience as I had to wait for one coat to dry before I turned it to the next side, but it was well worth it! 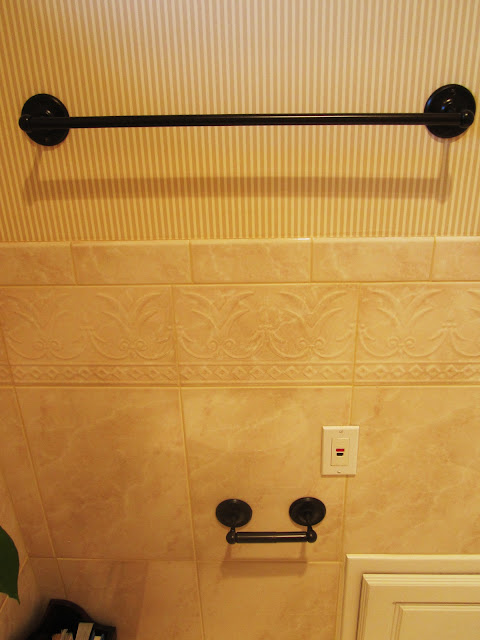 What took me so long?
I’m so excited to be joining Debbie’s Color My World Party!
Thanks for stopping by the Fence today,
Vanessa 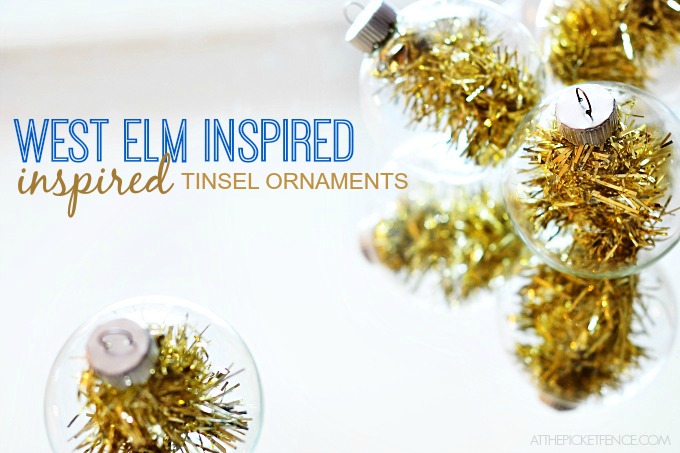 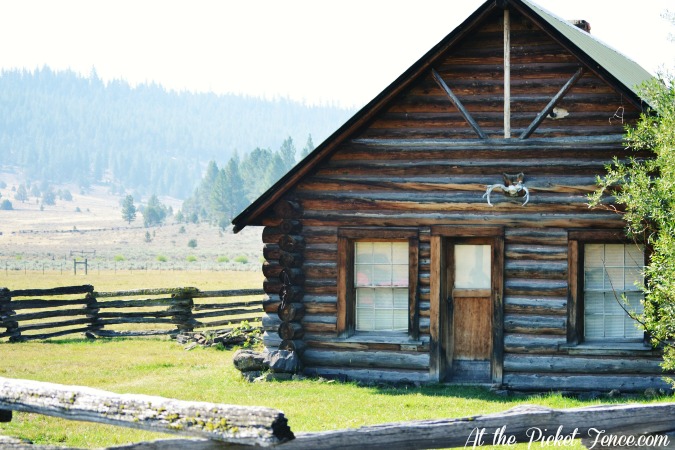