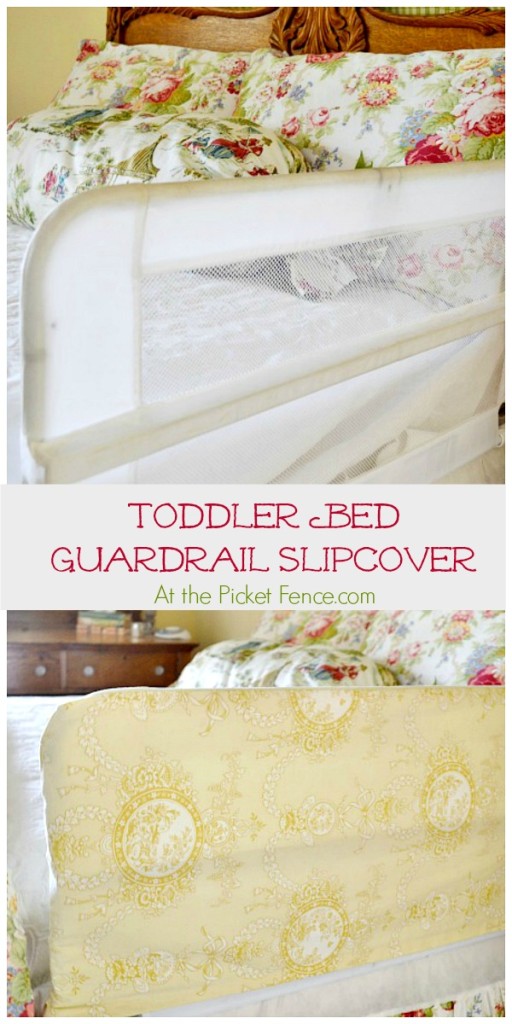 A couple of weekends ago I sat outside and watched little pieces of my heart walk off with total strangers. Sold off  to the highest bidder and callously carted away with no regard for the ache I felt inside.

We were having a garage sale. And among the picture frames, dusty fake ferns, lampshades and old curtains were items with enough memories attached to them to last a lifetime.

One such item was the guardrail which was so significant in that phase of transitioning both my sweet babies from their cribs to “big kid” beds. You know that phase right? It’s such a momentous event! You buy the new bed (or simply remove the railing from their crib like we did), watch them climb in and out over and over, say things like “oh you are such a big boy/girl now!” and then suddenly realize that their new-found freedom might not be such a great thing after all when they come and wake you up at some ungodly hour of the morning. 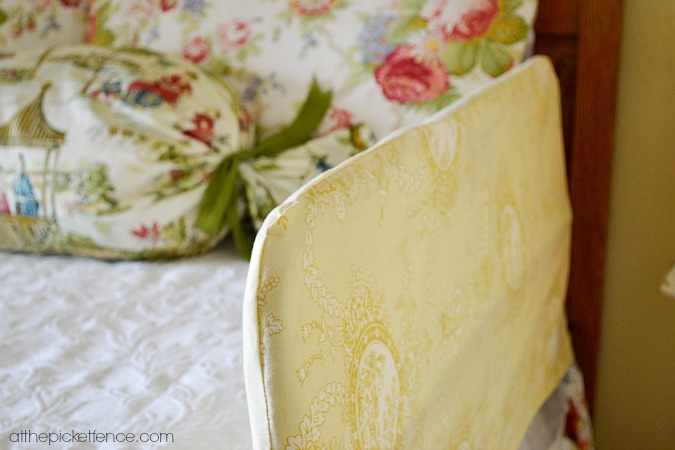 Of course, you can’t forget to attach a guardrail to the side of the bed so they don’t roll out in the middle of the night. But, the fact of the matter is that toddler bed guardrails are ugly. They just are. All of a sudden the coordinating fabrics I had carefully selected for their nurseries took a back seat (waaaaaay back!) to this white monstrosity.

And when my daughter got an even bigger “big girl” bed the ugly guardrail become a vital necessity as she has a serious case of the “flippy-floppies”. She’s been known to do a complete 180 in her bed at night! So, the guardrail, ugly as it was, stayed with us much longer than originally anticipated.

This was definitely not working with my ‘vintage little girl’s bedroom‘ theme.

And enough was enough! 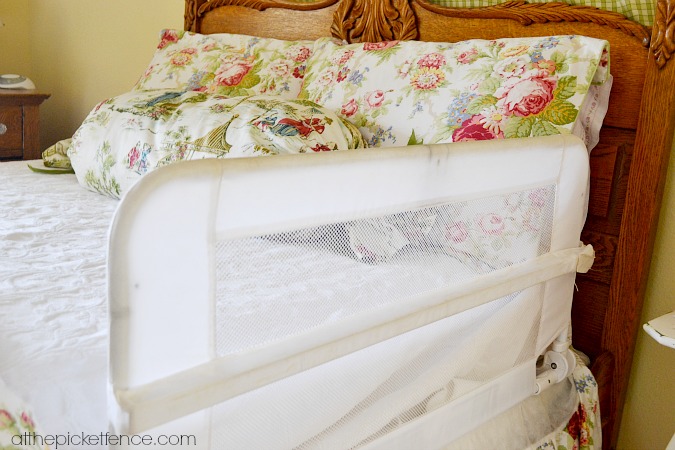 That thing had to have a slipcover. 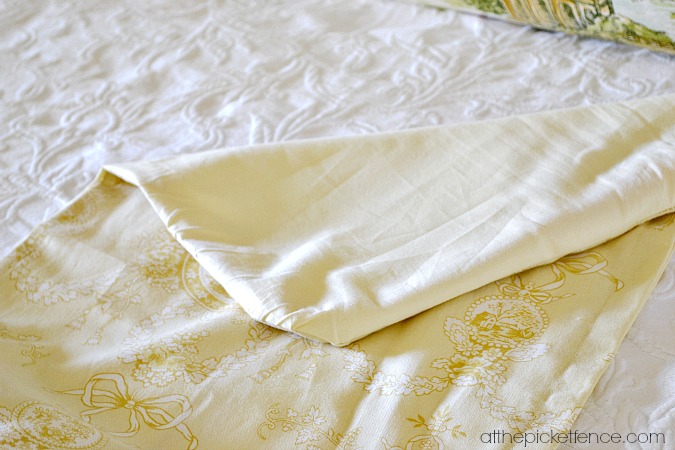 So, I dug around in my fabric bin and had that puppy covered up in no time! It couldn’t have been more simple to make and you could even do this as a no-sew project. It’s basically like making a giant pillowcase! 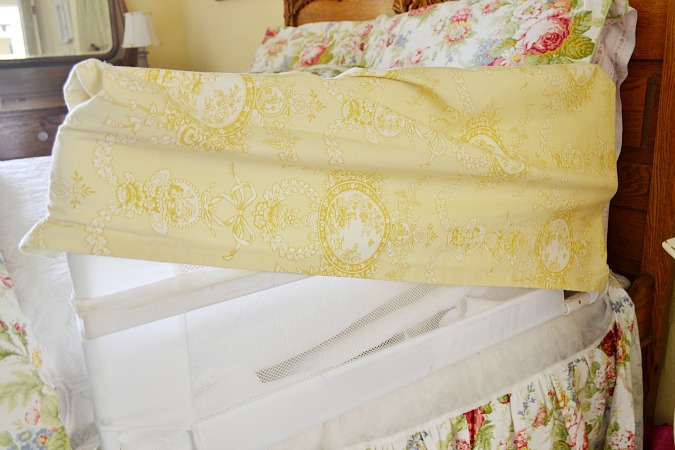 Except you “stuff” it with an ugly metal safety contraption.

And hide the ugly with some pretty! 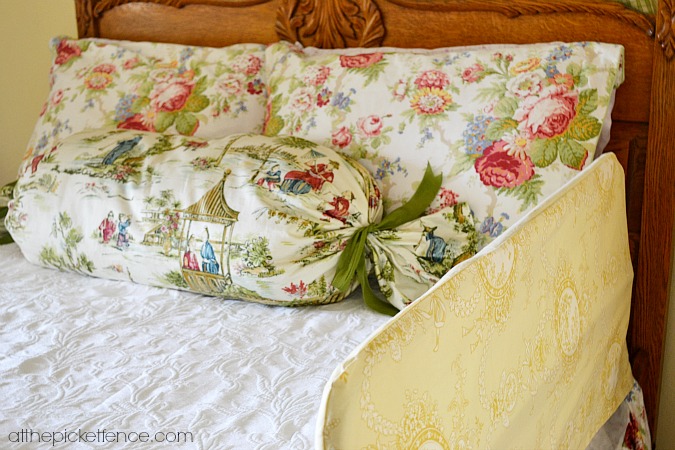 Want to know a secret, though? My daughter still has a mild case of the flippy-floppies but it has been quite awhile since this was actually attached to her bed. As I was getting ready for the garage sale I pulled the guardrail out of the attic along with it’s slipcover and reattached it to the bed so that I could take these pictures.

Should we call this, “True Confessions of a Blogger?”

As I removed it from the bed, folded up the little slipcover and added the guardrail to the pile of “to sell” items, I realized it was the end of an era.

I was talking with a friend the other day about that moment when you realize you are completely out of the “baby” or “little kid” stage of life. And when you realize that you won’t ever again celebrate the momentous occasion of getting a “big boy/girl” bed.  Or put Thomas the Train stickers on a potty training sticker chart. Or when it dawns on you that there was a “last time” that you carried your child up the stairs to bed but you can’t remember when it was because you didn’t know then that it would actually be the “last time” you were able to carry them.

She asked me if this realization made me want another baby.

And I thought about it for a minute before replying, “No, not really.”

You see, I’m actually quite happy with our family of four. Frankly, sometimes I’m still stunned and amazed that we get to be the parents of these precious two kiddos!

It dawned on me that it wasn’t that I was sad about never being in the “baby” stage again…I was just sad that my “babies” weren’t babies anymore.

A chapter has closed. But, it’s supposed to, right? It might be bittersweet but at the same time it’s exciting! The new chapter we’ve started will bring so many more memories and I absolutely love seeing my “babies” grow into these wonderfully interesting and hysterically funny people.

And, this makes it easier to say “farewell toddler bed guardrail!”

You may have been ugly but you will always hold a special place in my heart. 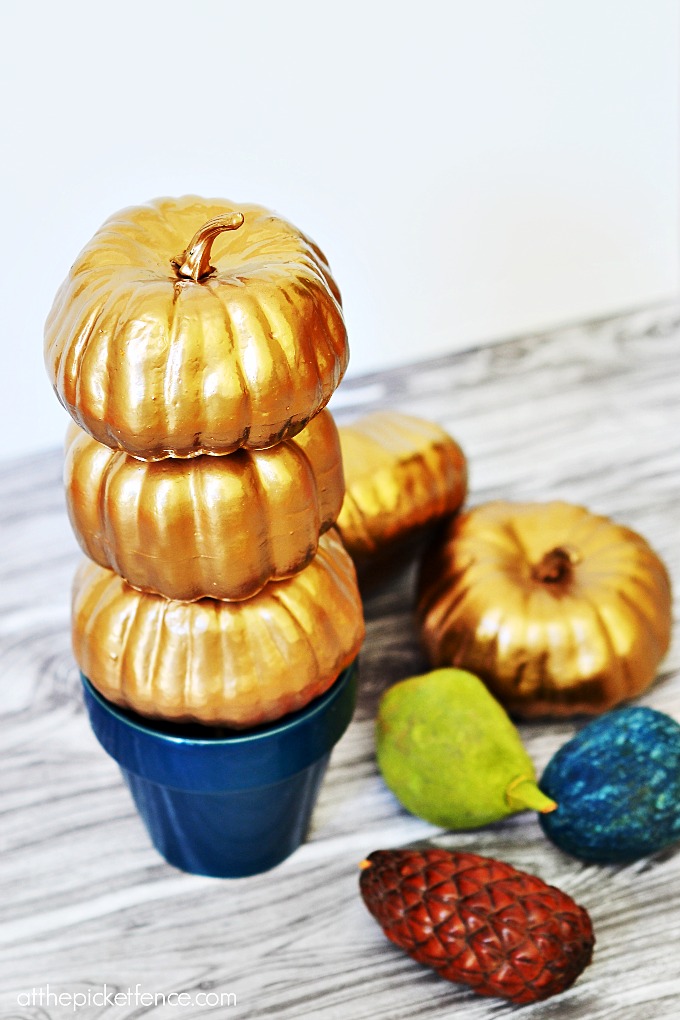 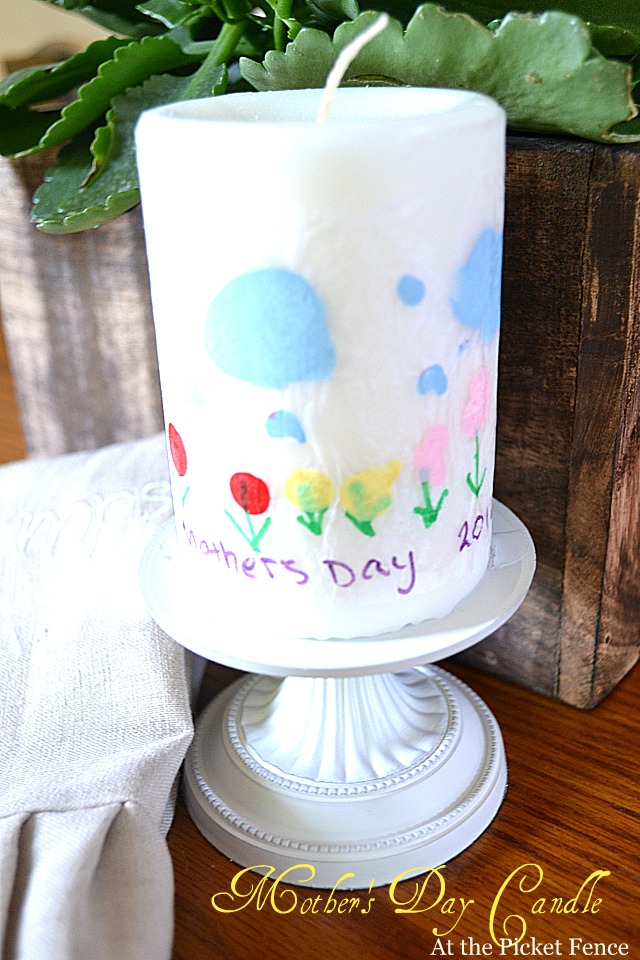